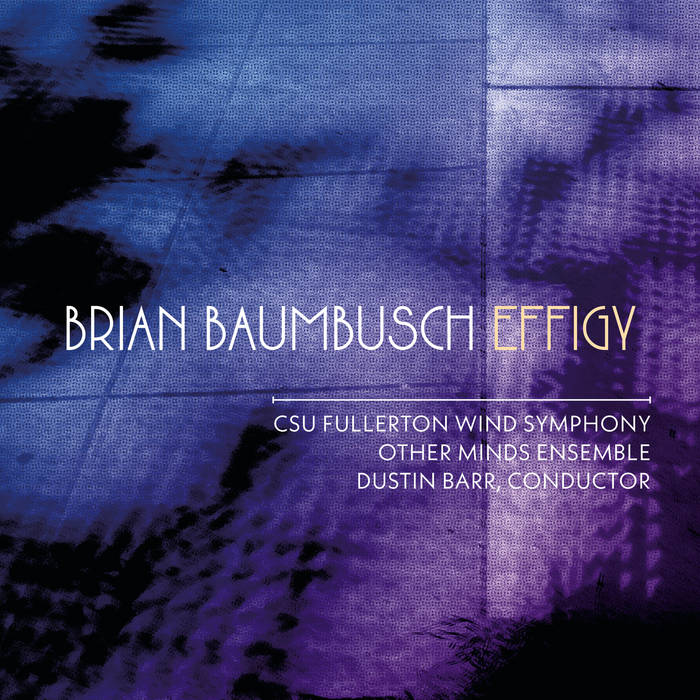 It’s all too rare that composers of forward-thinking music are granted access to large ensembles, much less those working in the lineage of the American Maverick. Rarer still is for one to handle these performing forces with the grace and delicacy that Brian Baumbusch exhibits throughout Effigy, his upcoming Other Minds record release. Effigy features performances of two previously unrecorded works by the CSU Fullerton Wind Symphony and Other Minds Ensemble, both conducted by Dustin Barr.

Effigy opens with the piece “Kings,” an homage of sorts to the American Maverick composer Lou Harrison, written for the composer’s centennial in 2017. Both artists share an affinity for gamelan-inspired rhythms, which is on full display in this work. Baumbusch expands on Harrison’s incorporation of non-western musics by bringing in raga techniques from Hindustani Classical Music. The composer includes a movement that highlights the National Steel Just Intonation Guitar, an instrument invented by Harrison himself and premiered at Other Minds Festival 8 in 2002. The fourth movement engages with polytemporal techniques that the composer would later expand on in the piece “Isotropes,” which makes up the second half of the album.

“Isotropes” takes inspiration from the rhythmic experiments of Henry Cowell and Conlon Nancarrow, realizing his densely layered “polytempo” techniques by providing each player with a click track. Melodies and figures that begin in unison slowly drift apart creating what Australian ethnomusicologist Oscar Smith calls “not de-synchronization but hyper-synchronization” in his detailed liner notes to the album.

The work was written in the wake of the COVID-19 pandemic and to accommodate lockdown restrictions. Players recorded fragments from their homes and sent them to Baumbusch who then combined them into the work represented on Effigy. The digitally-orchestrated “Isotropes” was then played back and recorded in CSU Fullerton’s Meng Concert Hall to provide a unified sound.

Isotropes was recorded at the homes of each of the individual performers, in isolation, between August 2020 and July 2021. A preliminary mix of these recordings was reamped and re-recorded at Meng Hall, Fullerton CA. July 29, 2021, to produce the final mix.