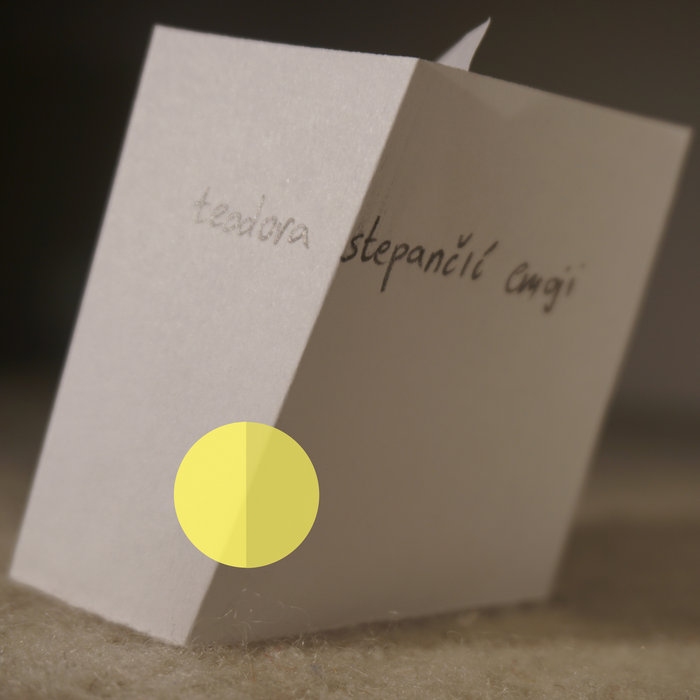 To listen to the music of Teodora Stepančić is to feel attachment to place. This poetics of place, however, is not limited to the representation of any specific locale. Her music does the profound work of place-making. That is, it enlivens a given environment through the production of a particular sensibility attuned to its inhabitants. As we listen to works such as emoji, we come to feel ourselves moving in Teodora’s sounds which, by dint of her artistic generosity, reveal fundamental things about our immediate environment. Stepančić, through her presentation of a handful of everyday sounds, is able to craft a powerful sense of place through her earnest musical actions.

Emoji began its life as a piece titled “Solo for Assaf” in which her partner in life and art, Assaf Gidron, executed the following instructions using live coding, speakers, a resonant space, and outdoor sounds. The score reads:

@)~ One sine tone appears, stays for a bit, disappears. A few times.

<•> Lowest audible tone fades in very slowly, sounds for a while, fades out very slowly. Again. Maybe again and again.

(---, A nice song. Very soft. Filter, effects, changes. For a long time. Few times it goes away for a little time and comes back.

This all happens while other sounds enter the space. There is no difference between outside sounds and created sounds. They blend and resonate in the space together.


On this recording, Stepančić here follows this series of actions. As she indicates with her instruction that “there is no difference between the outside sounds and created sounds,” we are encouraged to hear her entangled with our own world. As such, each listening becomes singular. In one listening, Slovenian bells accompany the song of a robin alighting on a tree outside my window. In another, the radiator gurgles quietly along with Stepančić’s piano chords towards emoji’s conclusion.

I should be clear that this music should not be described as “ambient,” it builds up an integrated sonic landscape that rewards close, repeated, listening. The conjoining of my immediate environs with the expansive world of emoji produces unexpected adjacencies that become meaningful synchronicities. Such coincidences activate a whole range of memories, feelings, and personal associations that are bound up with my experience of this work but are by no means limited to my own history or the specific references Stepančić draws out in the piece.

The word that gets at my perception of this music is permeability. Indeed, “permeable” is the adjective Stepančić uses to describe the music of LCollective, the New York City-based group which she founded several years ago. They make “permeable music in intimate inclusive listening environments.” There is some risk in taking the group’s mission as an aesthetic credo for Stepančić’s music in total, but there are important associations. I first heard the music that became emoji at an LCollective performance at the Kunstraum in Düsseldorf in 2019. It exemplifies the group’s concern with group intimacy as well as Stepančić’s personal aesthetic and political orientation.

At first blush, “permeability” as an aesthetic category seems related to John Cage’s Zen-inflected interest in music that affords “interpenetration” and “unimpededness.” Interpenetration, as Branden W. Joseph has noted, is for Cage “a state of virtual anarchic interaction and sociability ... the means by which such individuated entities, whether sounds or people, could evade solipsistic isolation.” Cage, in nearly all of his works after 1958, aspired to create such situations in which—and these are his words— “the wall [of the ego] has to be demolished; tastes, memory, and emotions have to be weakened; all the ramparts have to be razed.” Something about Cage’s insistence on demolishment has always rubbed me the wrong way and the sheer insistence of his language clarifies the reasons for my distaste. Interpenetration has destructive results—we lose memories and feelings—those things that make us who we are.

In Stepančić’s lexicon, however, permeability retains the openness of Cage’s environmental and everyday conception of sound without its attendant violence. The permeability of emoji, and indeed, much more of Stepančić’s music is one in which our memories and feelings are called up and depended upon to complete the work. And this work is not “the musical work” as autonomous object; it’s the work of being together, listening together—in this place, at this time, with these sounds, and these people. It is residing temporarily in a space of appearances in which sounds and people reveal themselves to one another with humility, openness, and without demand.

Mastered and Produced by Andrew Weathers